Hollandia in the 21st Century 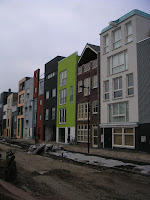 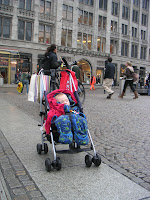 After months of anticipation, and harried last minute packing, we left for Europe. I'd like to just float on the word Europe for a few moments. It sounds so big, so cosmopolitan, so diverse. Yet, we went to just one tiny country; Holland, the homeland of mijn maan. For two and a half weeks, I did not have to drive into work, turn on a computer, or grapple with questions about our lives in Santa Barbara, because I was completely immersed in my surroundings. Usually I find it hard to let travel take me in immediately. I attribute my newfound present state of mind to my buddha baby who constantly pulls me into the moment.

Highlights: introducing Ezra to the Dutch clan; Seeing Ezra wave for the first time; Cruising around Delft at night; playing a soprano saxophone in a small music shop; Dining at a fabulous Portuguese restaurant in Zierikzee--an ancient fishing village in Southern Holland; a fab hotel in Middelburg, also in Southern Holland in the Zeeland province; watching an 1850s strip show in a Middelburg museum; walking my old haunts in Amsterdam; friends & relatives; public transporation that works; bicycles, canals and lots of weed. Oh, well, not really. No coffee shops for mama! Ahh, and Ijburg, a Dutch polder where we stayed with friends who own a beautiful new 3 story flat in the midst of a contemporary enclave. Very hip.

Here's Ezra taking in the historic sites of his father's homeland:
Posted by Kristin Anderson at 6:39 PM

Sounds like you had a great time. I just really love Amsterdam. I would like to live there someday.

Ezra from the West Side

The Art of Smiling

Can you say cleft chin?

Oh Baby its a wide world