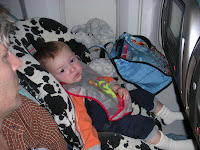 Ezra, at 19 months, has seen more of the world than I had at 18 years. He has been to Holland, China and the islands of Java and Bali in Indonesia, as well as Santa Barbara, Solvang and Lompoc, California. What a traveler!

The three of us left for Indonesia on August 23rd in the wee hours of the morning. A 14 hour flight brought us to Hong Kong, where we endured a nine hour layover by taking the high-speed rail from the airport to Hong Kong island. We walked through a maze of second story sky bridges around the island, visited Hong Kong park, and found an excellent restaurant off the touristy Times Square on our own. Another 4 and a half hour flight brought us to Surabaya, Java in the evening where we met up with Sietse, Arie Jan's brother and his fiance Li Tho--their wedding being the impetus for our journey to a third world country.

As I type 3rd world country, I have to say the wedding held on a private estate reflected nothing of the poverty and chaos we witnessed in other areas. The wedding was held at a beautiful and exotic Italian Villa called Villa Leduk in Java--a mountainous rural area a few hours from the bustle of Surabaya. 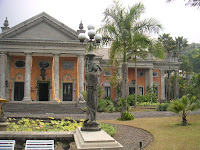 For once I can write palatial and truly know the meaning of the word. Villa Leduk is modeled after Palladio's villas in Vicenzia (sp?) Italy. It has three wings. The main entry leads to a central hall with a large chandelier suspended in its dome. This entry corridor acts as an axis for the main wing, with a grand parlor to the left (as you face the home) with two grand pianos, a fireplace and three clusters of sitting areas in which to gather for tea, listen to performances, etc. Tapestries and artwork, some original and some replicas, spanning many centuries surround you.It is regal in every sense, and yet the gracious hosts and owners, Atmadja Tjip To Biantoro and Bagoes, exude casual elegance, that enables you to relax and sink into the beautiful chairs and couches with acceptance.

The right wing is an elegant dining room which can easily seat 80. Here is a picture of just the main wing from the back of the villa gardens. 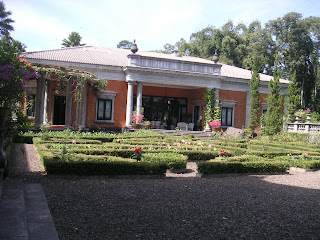 Amazing! That boy has toddled around the world... what an adventure!

Ezra from the West Side

The Art of Smiling

Can you say cleft chin?

Oh Baby its a wide world